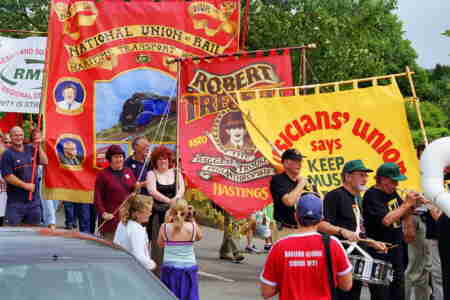 Once again, apologies for the long gap before writing to you. As ever we have been dogged by financial problems which has meant that we have not been able to afford to post out a Newsletter. We are attempting to keep the Tressell momentum going currently with small events, such as the one day event that took place back in June at Hastings Museum plus the Tressell walks. We have also been working hard to find other sources of funding and we hope that we have made some useful contacts with the Workers Beer Company and Battersea and Wandsworth Trades Council as well as our existing links with the GMB in the Southern Region.

We have however, even with very small funds, been able to keep the profile of Tressell going, namely at the Tolpuddle Memorial Festival in July, where the banner is one of the great favourites amongst the growing number of visitors. It must be one of the most photographed, and is often applauded and commented on as we take part in the annual procession through Tolpuddle village. If you have access to our website you can see the photographs taken at the Tolpuddle Festival this year. There is still some work to be done on the banner, and our personal banner maker, Pete Thompsett will be finishing the work later on this year, in order for Tressell to take his place in Hastings Town Hall alongside some of the dignitaries whom no doubt made his working life and those of his characters in the book so miserable. A photograph of Tressell still holds pride of place in the Mayor’s Parlour, where he keeps eye on the Labour mayor and his councillors. 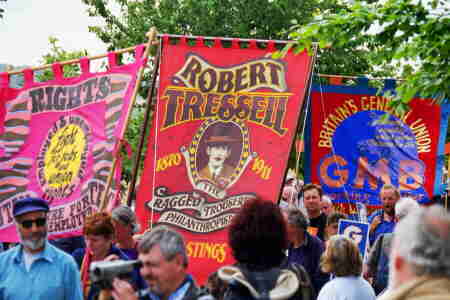 Perhaps the most exciting development this year has been the first ever Robert Tressell Festival to be held in Dublin, which a number of our regular festival goers attended. We had a wonderful weekend enjoying the traditional warm Irish welcome from our comrades in the Services, Industrial, Professional, Technical Union, otherwise known as SIPTU. The article written by Ron Bill from Harlow describes the weekend wonderfully, and indeed we have to thank both Ron, and Paddy from SIPTU for organising the event.

We have put a brief form at the end of this Newsletter which we would be grateful if you could fill in if you have any ideas about some of the following: speakers for the Festival, other events we could organise, contacts which you think could be useful and finally your e-mail address if you have one. If we can develop an e-mail list it would help keep down our costs when we send out the Newsletter. If you ever want to e-mail us the address is Tressell@1066.net or via the visitors' book

Finally, we are hoping against hope that we will be able to organise another Hastings based Festival next year, we are still trying to decide exactly when it would be but it is likely to be in July, August or September, similarly, if you have any strong views on when you would like it let us know.

The first Robert Tressell Festival to be held in his home city of Dublin took place on the 18th and 19th September 2003 in the Connolly Room, Liberty Hall, Dublin – Headquarters of SIPTU which represents amongst other, Painters and Decorators. The event was opened by Jim O’Connor, incoming President of SIPTU, Stan Newens and Charles Callan both contributed interesting talks on the first evening followed by a lively session of Irish music in the SIPTU bar! At the Friday event Francis Devine and John Nettleton were the speakers; at the conclusion Ron Bill on behalf of the UK contingent thanked Paddy Coughlan and SIPTU for organising and financing the Festival. Ron presented the Union with a small token of our appreciation. It was noted with interest that the TUC library collections at London Metropolitan University where the original manuscript is held were now able, for the first time to offer the Ragged Trousered Philanthropists on-line. Just what would Robert have made of his story being on the World Wide Web?!

The visitors took time out on Friday to visit the birth place plaque in Wexford Street and to view the framed picture and the citation in the Dublin Writers Museum in Parnell Square. We also visited the Smithfield Observation Tower, Kilmainham Gaol, and the Guinness Storehouse, the latter providing a panoramic seventh floor view of Dublin from the Gravity Bar with a complementary pint of the product!

So – nearly a Century on from its origin The Ragged Trousered Philanthropists continues to attract interest, dedication, debate and enquiry. The work itself and how it came to be written is an interesting story, but the survival of the manuscript and its long journey to the TUC Library Collection is truly remarkable. In recent years there has been a renewal of interest in the author and his work. In 1977 a new gravestone was erected in Walton Park Cemetery Liverpool – thanks mostly to the amazing work of John Nettleton. In Dublin in 1991 the Trades Council and others raised money for a birth place plaque to be placed on 37 Wexford Street. In 1999 the first of three successful annual Festivals was organised in Hastings (Mugsborough). In April in 2002 Robert Tressell joined the company of many renowned Irish authors when a framed picture was placed in the Dublin Writers Museum, and has now taken his rightful place alongside Yeats, Swift and of course that other well known painter and decorator Brendan Behan.

The Dublin 2003 Event has contributed to the process of seeking deserved recognition of Tressell’s literary merit in his home city. Robert Noonan has come home.

Today the continuing world wide struggle for Trade Union recognition, fair wages and improved working conditions remains. Tressell cannot have imagined the influence and endurance of his work, nor perhaps would he have believed that nearly a Century on we would still be seeking to achieve the “glorious fabric of the co-operative commonwealth” that Owen so eloquently pleaded for through his ragged Trousered hero.

The Robert Tressell Committee in Hastings are already discussing proposals for a 2004 event (see above) and a second Dublin event will hopefully take place in 2005.

· The Ragged Trousered Philanthropists took its rightful place in the BBC Big Read list of the top 100 books earlier this year – we wait in hope that when the Top 10 is released it will be in there. A well known book club has been promoting the book as well as one of its special offers so hopefully it will be introduced to a whole new audience.

· One of Tressell’s biggest fans has just published his Autobiography. Ricky Tomlinson has even named a chapter of his book “The Ragged Trousered Philanthropists.” His moving account of his first introduction to the book in prison and how it changed his outlook on life is a remarkable testament to both Robert and to Ricky himself. In his promotions for the book Ricky has also been interviewed on Start the Week and Parkinson and has spoken about the Ragged Trousered Philanthropists on both programmes. Apparently Ricky also sends copies of the book far and wide across the globe to spread the word.

Your Ideas and Information

· Your e-mail address (if appropriate)


Back to main page